Learning to Believe in Yourself – A Backpacking Adventure!

Learning to Believe in Yourself – A Backpacking Adventure!

Fall is a popular time for staff from Great Circle’s Meramec Adventure Learning Ranch to take young clients on backpacking trips to discover both their inner strengths and develop bonds of friendship. It's an effective way to help young people heal from the trauma in their lives.

The experiences give participants a chance to build skills and discover personal strengths, and experience the outdoors, perhaps for the first time, but always in a way that gives them a sense of accomplishment.

Here’s an account of the recent experiences by seven teenage clients of Great Circle who spent four days exploring 16 miles of trails in southern Missouri.

(Editor's Note: Real names have been changed to protect the boys' privacy.)

The young men from Jenkins and Stricker cottages on the Columbia campus have returned from their backpacking trip! Everyone worked so hard to complete the four-day, 16-mile trek. We ate lots of great food and had meaningful talks in the peaceful woods. The changing of the seasons and myriad leaf colors sparked deep thoughts about who we are created to be and how we are a part of something bigger. 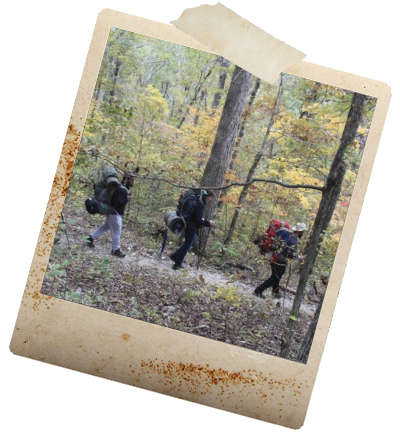 The boys found they could push forward through hard moments, and protect each other at the same time, despite what they may have been told throughout their lives. They carried heavy packs and hiked way past the point they thought possible, AND THEN set up tarp shelters, did camp chores, and cooked food over backpacking stoves - proving how strong and capable they are. By staying calm during frustrating moments, they discovered how much their behavior affects others and the importance of staying in control of their thoughts and actions.

We told stories around the campfire, skipped rocks at the river, and built things, such as seats, to make our campsite a more enjoyable place to stay – and found joy in those little moments. And each backpacker earned a trail name, as is often the case upon completion of a significant trail hike.

Tim earned the name “Crusoe” after Robinson Crusoe. Just as the man deserted on an island for 27 years who persevered through the most troubling of times while maintaining a positive attitude, that’s what we saw in Tim. During difficult moments, he was focusing on the positives of the situation, often the lone young man with a smile on his face. He was silent, sturdy, and never complained.

Richard earned the name “Engineer”. If you knew Richard, you would understand how perfectly the name suits him. Richard loves to create things and was constantly looking to improve the systems we already had in place. He helped the group wherever he could. Whether he was encouraging the rest of our group or helping someone along the trail, he was as a vital part of our trip.

Kevin earned the name “Bootstrap” by proving to himself how strong of a man he is. During difficult moments on the trail he pulled up his bootstraps and kept moving forward. Never did we see him on the verge of quitting and instead found him loving every moment of the wilderness. He channeled his inner frustrations in a positive way and emerge as a leader of our group. And as all good leaders do, Kevin didn’t let anyone get behind and helped us all find the joy of the woods together.

Calvin was the trip’s veteran, having completed the same trail in the Spring and earning the name “Braveheart”. He do so because of his ability to protect those around him and to keep his calm no matter how hard the situation. On this journey, we were unsure if Calvin would retain his name or earn a different one. But he really stepped even further in to “Braveheart” role, protecting those around him physically and emotionally. Even when we knew Calvin was hurting, he never showed it. Instead, he continued to spread his ability to stay calm throughout the group.

Michael earned the name “Grizz”, in reference to the mighty grizzly bear. Grizzlies keep those around them safe and fight only when they must protect. Michael was completely out of his element on this trip but learned to fight for only what is important to him. He also discovered that being an adult means protecting people, both physically and emotionally. By the end of the trip, he was our protector, focused on keeping those around him safe.

Jacob began this trip wanting the trail name Flame Thrower. He struggled a lot on our trip, but we began to see moments of who he is truly created to be. When Jacob made positive choices, he laughed, hiked like a pro, and put others before himself. Because of his desire to change, he earned the trail name of “Zippo”, because a zippo is powerful and can withstand the powerful elements. We hope Jacob can step into the name of Flame Thrower very soon.

Charlie earned the name “Ranger”. Despite the fact that he and his pack appeared to be about the same size and weight, Charlie could be seen setting the pace at the front of the group setting our pace or, like a ranger, scouting for the perfect place for the group to take a break or sleep for the night.

All these young men accomplished something many people will never do in their lifetime. We are so proud of what they have done! Here’s a picture from the trip, so you can get an idea of what life on the trail was like.

Yours from the trail,
Lauren
Meramec Adventure Learning Ranch