Successful $21.5 million Campaign for the Path Ahead
expands access to behavioral health services

In early 2018, Great Circle announced the successful completion of its four-year, $21.5 million “Campaign for the Path Ahead” that created a regional hub enabling children and families to access more educational, therapeutic and social support and services when they need it most. A statewide nonprofit, Great Circle is one of Missouri’s largest providers of family support and behavioral health services, serving more than 38,000 people each year.

Through the campaign, Great Circle has expanded its services and facilities available through its 22-acre Webster Groves campus, 330 N. Gore Avenue. The improvements mean the campus is well-equipped to meet today’s needs to provide behavioral health services to children and families.

Thanks to Donors: Thanks to the hundreds of individuals, companies and foundations that helped make Great Circle’s Campaign For The Path Ahead a tremendous success! 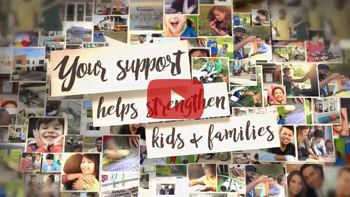 Celebration Video – Campaign for the Path Ahead
This celebratory video honors those who helped
make the path in the St. Louis region complete.

Automatic gifts debited from your checking or savings account can save time, help you budget, and provide sustaining support for kids

“My son was diagnosed with autism when he was 3. He couldn’t speak. He climbed on top of furniture. He became harder and harder to control. When I learned about Great Circle’s day school for kids with autism, I was almost without hope. Lucas was enrolled and things began to change. He started using picture communication and is toilet trained. He has even started to speak words. You saved my son’s life—and mine."
- Michael, Lucas’ dad

“Great Circle is truly a blessing for our family. Having a school for our son with teachers who understand his needs, are trained to respond to them, and most importantly, are willing to accept him and continue to work with him every day, is something for which our family is tremendously grateful.”
- Mike and Elizabeth

“I am very glad you did not give up on me, from that very first month on until we built a friendship and bond. Thank you so much for all of the time you took to spend time and talk with me.“
- Danielle